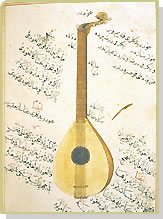 Makam is the most important concept in Ottoman-Turkish music as in all modal musical traditions; in other words, the usul, rhythm is of secondary importance since a melody can fulfil the requirements of a makam without being subject to restrictions of rhythm. As a matter of fact, musical forms or performance with no fixed rhythm constitute a significant aspect Turkish music.

Makam is a concept that cannot be defined in a simple, straightforward way. It is a complex phenomenon, especially in Turkish music. Such complexity results from the variety and instability of the elements that shape its very structure. To be able to understand in a most satisfactory way what kind of formation makam is, one should first make a distinction between the theoretical definition of a given makam and its true identity arising in practice. There may be several differences between makams as defined in theory books and their practised version(s). Although it is a fact that every theoretical definition introduces a generalization, hence imposes a certain limitation, some of those differences may be a sign of subtle points of performance which the theory has not included and conceptualised yet. Theoretical knowledge is only a preliminary framework that introduces a general notion on makams, which is a significant starting point. However, music based on the concept of makam is primarily a genre that exists through composing and performing.

In theoretical terms, makam is defined first by its scale, that is, the tones or notes which lend themselves to the makam in question. Yet the practice often goes beyond the scope of the very scale shaped by its given tones. The upper and lower extensions of a makam may be regarded as tones belonging to the same scale. Although in general it may said that a makam uses the same tones both in the upper and lower extensions, it is possible that it may use extensions more than one, meaning that the extensions are not always symmetrical, in other words, the tones employed in the first octave do not always coincide. This kind of alteration, which should be regarded as a characteristic aspect of makam music, attests to the fact that scale as a principle determinant of makam in this particular case is given up.

Modulation and Çesni or Melodic Genera

Study of makams also require an understanding of concepts of "modulation" and "melodic genera", traditonally referred to as the çesni in Turkish music, which literally means (melodic) "flavour". Certain modulation patterns may become conventional after they have been employed for a long time. Such typical modulations cannot be excluded from the broader understanding of makams although they are not included in the general, standard structure of the same makam, because they are modulations that are "appealing" it since it adds a certain loveable "flavour" to it. The word çesni, that has become an established concept in Turkish music, is obtained from tetracords, pentacords or even tricords borrowed from other makams. Some of such genera may regarded as the formal requirements of the related makam structure while others as being an inseparable part of it due to the fact that they have been employed throughout the centuries. Such genera add colour and give identity to a certain makam as well as make it easier to distinguish it from a makam which displays parallel melodic contours. For example, the makam bayatî employs hicaz genera on the tone neva (d) and nikriz genera on çargâh (c) before it takes steps towards the final tone. These distinctive flavours makes bayatî distinguishable from makam ussak. The genera included subsequently in the structure of a makam may add new scales to the existing scales.

Makams may employ elements that are even smaller than a tricord. Tones not included in the very structure yet cannot be regarded as a modulation, those deviations or small ornamentations which display themselves in a single borrowed note also reveal an aspect of the concept of makam. Such single note ornamentations which can be found in a number of compositions, hence cannot be considered to be modulations is an interesting aspect of the makam phenomenon which has not been studied sufficiently. It is worth noting here that there are musical elements that do exit in makam practice but have not yet been conceptualised at the theoretical level.

The makam phenomenon exhibits a historical dimension as well. The practised versions of makams in today's Turkish music are generally those which became established in the nineteenth century. However, the names of some makams have changed and others even though employed in the past gained a different pattern. Even the most established makam is subject to some evolution or change. Within the long history of a certain makam, its melodic progression, its tetrachords and pentacords, or even its entire scale may have been exposed to change. The makam structure of the compositions of the seventeenth century music given by Cantemir and Ali Ufki clearly reveals this aspect of the makam phonemenon. Historical change cannot be ruled out in studying makams. By virtue of its historicity, the makam should be seen not as a static musical entity. The makam kürdilihicazkâr, a relatively new makam created as late as the mid-nineteenth century, became diversifed and more complex within a century and today began to be used in several versions.
A study of the historical process is necessary for grasping the very nature of the concept of makam as well as understanding the development of Turkish music. The makams that appear in simpler structures in the seventeenth century have become enriched with new genera and with melodic progressions from the mid-eighteenth century onwards and acquired new scales. Such practice should be seen as the contribution of new generations who within certain limits introduced novelties into former makam practice. The prominent divergences of the structures of the compositions produced three centuries ago and those at the beginning of the twentieth century reveal the fact that makams have evolved from simpler structures to compound and more complex ones. The composers of the past have aspired to express their creativity by elaborating on aspects which have not been done previously. Seeking new ways opened paths to arranging or devising completely new makams as well.

The structure of any makam may be presented on a staff by musical notes, yet in the compositions themselves and in their performance they will have to include several more elements, which display a variety, richness, and also instability and they cannot be directly written down on the staff. At this point it should be noted that the true identity of makams can be described not only in general theoretical terms but in the way they have been dealt with in the compositions found in the repertoire of Turkish music.

In modern Turkish musicological studies which began in the twentieth century the "tonal system" of Turkish music was given emphasis and the makam concept have often been treated within the parameters of the proposed tonal system, hence the aspects of makams which cannot be explained thoroughly therein have been left outside the scope of the inquiry.

The makam concept thus has been blurred by attempts to devise a theoretically consistent system. Most theories in general terms have not taken the makam phenomenon as their point of departure but painstakingly tried to make makams fit into their own system. Such a theoretical position has not been able to cover all aspects of makams. This position should be replaced by a perspective not explaining makams starting from the demands of the tonal system but from the actual makam practice in order to arrive at a more flexible concept of tonal system, hence bring the theory closer to and incorporate into practice.