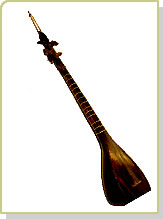 The kopuz is classified in organilogy as a "short-necked lute."  The term "kopuz," used since ancient times in Central Asia to mean "musical instrument," appears in today's Turkic languages in several variants such as komis, kobuz, kobiz, kubuz and homis. It refers to several instruments of varying degrees of similarity. In the Middle Ages, an instrument known in Iran and its surrounding areas as rebab or  rûd, came into use in Ottoman palace music with the name kopuz in the 9th century at the latest. From documents of palace expenditures in 1525, it is apparent that this had become the most popular instrument during the reign of  Kanunî Sultan Süleyman. This instrument, which we encounter in several Indian-Mogul minatures, and which the Chinese wrote as huoposu, is pear-shaped, with a long neck and a face half of  animal skin, half of wood. It is depicted in many Iranian miniatures and Selçuk reliefs; in some of Iranian miniatures it is shown in a very large size.

Though Evliya Çelebi wrote of the kopuz as "üç tarli" (three-stringed), both models of this instrument appearing in miniatures show four pairs of strings.  With a fretless neck, the kopuz was played with a hard plectrum similar to that used with the tanbur.

Though the kopuz has been classified as a "short-necked lute," its neck was considerably longer than that of the ud. In this sense, it resembled the Turkish lavta of later periods.  Historical sources provide no clues as to how the kopuz was tuned.