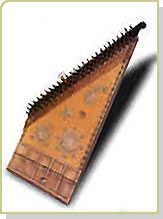 The kanun is one of the kithara class of instruments, which besides Turkey is used in North Africa and the Middle East, Iran, Uzbekistan, Armenia, Macedonia, Kosovo and Greece. In organology, which examines and classifies musical instruments, kithara is the common designation for instruments in which the sound is produced by the vibration of taut strings arranged "openly" from short to long. The name kanun, used in Turkey, Iran and all of the Arab countries, is replaced in other countries by variations either of the Arabic or Greek counterpart.

STRUCTURE: Though the kanun has undergone several changes over the course of its long history, its basic structural features are the same in all countries in which it is played today. Its range extends up to three and one half octaves. The player uses ivory picks.

HISTORY: Nearly all organologists consider the Arabic word kanun to be a derivation of the Greek kanon. Like its name, the instrument's half-trapezoidal shape is thought to have been given by the Arabs.

The 14th century Persian treatise Kenzü't-Tuhaf contains a diagram and written description of the kanun, along with other instruments. The writer provides detailed measurements of the kanun, which he depicts in a half trapezoidal shape. According to the treatise, the instrument had sixty-four strings tuned in sets of three. In his work titled Câmî'u'l-Elhân fî 'Ilmü'l-Musiki and other treatises, the great composer, virtuoso and theoretician Abdülkadir Meragî (-1435) describes the kanun along with other instruments.

Taken to Europe by the Anadalusians around the 12th century, the kanun was known in Span as the caño, in France as the canon, in Germany as the Kanon, and in Italy as the cannale.

Coming into use in Ottoman music in the 15th century at the latest, the kanun underwent changes to its structure, and its size was sometimes increased, sometimes decreased. The kanun used in Istanbul in the 16th century can be considered identical to that used in Iran and Mesopotamia. This instrument was most likely constructed entirely of wood, with metal strings, an assumption supported by several miniatures. The kalun used today by the Uygurs is the only modern instrument resembling this kanun.

The shape of the Ottoman kanun of the 17th century is not precisely known, but it is certain that towards the middle of the 18th century, the instrument assumed a shape very near that of today's kanun. As the kanun had been abandoned in Iran during that period, we can assume that the changes leading to its present form were carried out in Turkey and the Middle East (Egypt and Syria).

Cantemir's contemporary Levnî did not illustrate the kanun in any of his miniatures. However the picture in Hizir Aga's Tefhîmü'l Makamât, estimated to have been written between 1765 and 1770, depicts a modern kanun for all intents and purposes.

In records from the reign of Sultan Selim III, no kanun players are mentioned by name. However, during the reign of Mahmud II (1808-1839), this instrument came once again onto the scene. In the 19th and early 20th centuries, the kanun was one of the instruments that were played by women.

In the second half of the 19th century, the kanun was quite popular in Istanbul. A professional music ensemble without a kanun was unthinkable.