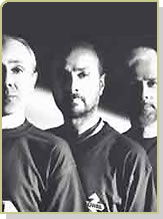 Üç Hürel (The Tree Hürels) was formed in 1970 by three brothers, Feridun Hürel, Haldun Hürel and Onur Hürel. Their lyrics and music were written mostly by Feridun Hürel. From 1975-76 to 1996, they stopped performing. They made this "Hürel" music, which was heavily grounded in rhythm, soft, and always focused on the painful side of life, popular with the Turkish public, and became one of the legendary groups in Turkish music. Their song "Aglarsa Anam Aglar" (If my mother cries, she cries) was one of their most popular.