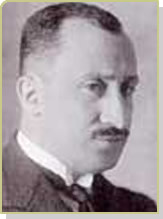 (1858-1939) Born in the Istanbul district of Tophane, Colonel Saffet Atabinen entered the Mizika-i Hümâyûn in1863. He took lessons in flute and harmony from Guatelli Pasa. In 1886, he became a senior captain and was sent to Paris. Staying here for one year, he took lessons in harmony and composition from Théodore Debois. He returned to Istanbul at the age of 29, and with the rank of major, first became a band director, then orchestra director, performing Beethoven's symphonies. After being promoted to colonel, he went on in 1908 to direct the Mizika-i Hümâyûn. In 1918, he retired at the age of 60. He died in Istanbul on June 23, 1939, at the age of 81.