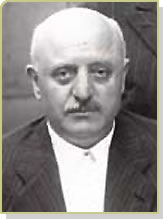 Sâdeddin Kaynak was born in Istanbul in 1895. While still quite young, he drew attention with his beautiful voice, and he began learning ilâhi by the meşk method (repetition of phrases given by the teacher) from Hâfız Melek Efendi. In 1926 he went to make records in Berlin, and at various later dates to Vienna, Paris and Milan. He made records in Turkey as well. In his compositions, he conformed to the forms and traditions of Turkish music, and produced nearly two hundred great and minor works of great beauty in all forms. He died in 1961.