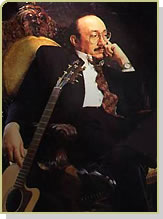 Özdemir Erdogan was born in Istanbul in 1940, and was exposed to music at a very early age through is mother, a classical pianist. In 1968 he was chosen best guitarist of Turkey. His first record, "Kimbilir" (Who knows) was released in 1969, and in 1972, he made the album "Sivrisinek Saz ve Caz Toplulugu" (Mosquito saz and jazz ensemble). In 1973 this album was much played on Voice of America Radio, and gained a considerable following. His song, "Ikinci Bahar" (Golden age) became one of his unforgettable hits.