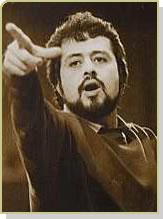 (1956-) After being trained as a pianist at the Ankara State Conservatory, Seçkin continued his musical education at the Vienna Academy of Music with a grant from the Austrian Government. Studying under Karl Österreicher and Sergiu Celibidace, he graduated from the piano and orchestral conducting branches. Having served as guest conductor to some of the foremost orchestras of Europe, he served as the general director of music for the Mersin State Opera and Ballet, and in 1995 was appointed General Manager of the Izmir State Opera and Ballet. He continues his career at home and abroad.