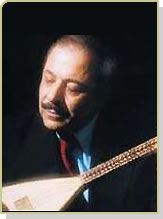 With his vast repertoire and knowledge, gained first and foremost from his father Muharrem Ertas, as well as from the social environment in which he was raised, Neset Ertas has taken his place as one of the most important local artists of the century. Born in Kirsehir in 1938, he performed köçek (a wedding dance tradition performed by men in women's costume), at weddings from a young age. Later he began playing baglama and singing folk songs. He has made hundreds of recordings, and has become well known for his own original songs. His poetry, which he writes with the pseudonym "garip" (stranger, wanderer), has distinguished him as an asik. He currently lives in Germany.