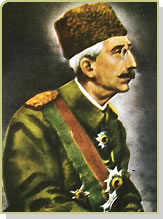 Mehmed VI (Vahdettin) (1861-1926) 36th Ottoman sultan, and the youngest son of Sultan Abdülmecid. He ascended to the Ottoman throne in 1918. He fled Turkey after the war of Independence and died in San Remo (Italy) in 1926.

Mehmed VI took interest in both Turkish and Western music. He played the piano and the kanun. He also collected the musical notations of a great number of Turkish compositions. To this day, olnly a few of his compositions are known. It seems that there are many more of his works that have yet to brought to light.