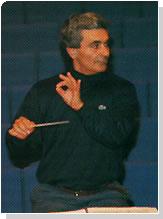 (1942-) Presently conducting the Borusan Istanbul Philharmonic Orchestra, Gürer Aykal was for a long period the permanent conductor of the Symphony Orchestra of the Prime Ministry. Educated at the Ankara State Conservatory from the age of eleven, Aykal studied violin with Necdet Remzi Atak, and composition with Adnan Saygun. He completed his training as a conductor at the Guildhall School of Music and Royal Academy in London, working with such names as George Hurst, Andre Previn and Franco Ferrara. Aykal graduated with honors from the Santa Cecilia Conservatory, and in 1981 received the title "State Artist" from the Turkish government. Directing the Symphony Orchestra of the Prime Ministry, the Borusan Philharmonic Orchestra and several virtuosos, Aykal has directed the premiere performances of works by Turkish composers such as Adnan Saygun, N Kazim Akses and Muammer Sun.