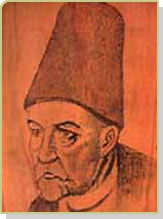 Dede Efendi was musical genius, known by several names in Turkish Art Music circles, including Dervis Ismail, Dede, Dede Efendi, Hammâmîzâde Ismâil Dede Efendi and Ismail Dede. He was born on January 9, 1778 in Istanbul, and entered the Mevlevi order. Dede composed seven Mevlevi ayins. Besides these, he also composed a great number of secular works in genres including kâr , kâr-i nâtik, beste, agir semâi, yürük semâi, sarki, türkü and köçekçe. From the standpoint of style, Dede Efendi's pieces were quite noble and dignified. Dede Efendi was one of the rare composers who remained completely faithful to the classical style, but also managed to be creative and innovative in his compositions without ever departing from the rules and conditions of this style. He died in 1845.