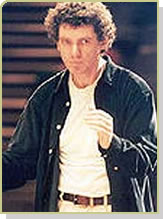 (1957-) Actually educated as an engineer, but drawn by his passion for music to orchestral conduction, Cem Mansur attended the English Royal Academy of Music where he was educated in solfege and piano. After completing his education in Europe, he returned to London, where in 1979, he founded and directed the St. James Chamber Orchestra. Later he continued his conducting career in the United States, where he worked with the famous conductor Leonard Bernstein and received the Ricordi Award. After his return to Turkey in 1984, he directed the Istanbul State Opera and Ballet Orchestra, and then in 1988, was appointed permanent conductor of the Akbank Chamber Orchestra, in which capacity he continues today.