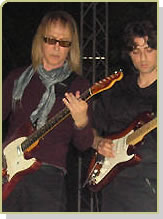 Bulutsuzluk Özlemi have the distinction of being one of several "firsts" in Turkey with their musical work in the 1990s. Successfully combining western rock melodies and rhythms with the centuries old Anatolian music tradition, the gave a musical answer to the question "Can rock be written with Turkish lyrics?", which had long been debated in Turkey. The group consists of Nejat Yavasogullari, Sina Kologlu, Akin Eldes, Sunay Özgür and Utku Ünal. "Uçtu Uçtu" (It′s gone for good) is one of their popular songs."