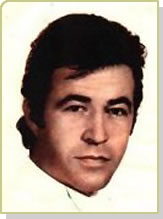 Berkant was born in Ankara in 1938. His love for music began with his older brother's gramophone and 78 collection. At the age of 14 he had already built up a broad repertoire consisting mostly of the songs of Dean Martin, Frank Sinatra and Nat King Cole. He first went on stage with Üstün Poyrazoglu in Ankara in 1958. In 1967, he performed the song "Samanyolu" (Milky Way) by Metin Bükey and Teoman Alpay. This 45 broke records, selling over a million copies, and earning Berkant a platinum record.