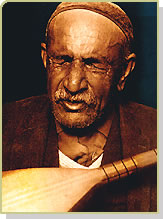 Born in 1894 in the poor Anatolian village of Sivrialan, near Sivas, he lost his eyesight at the age of seven as a result of smallpox. He first became known in 1936, at an aþýk festival, and gained fame throughout the country for the lament he sang upon the death of Atatürk. He also served as a teacher in the "village institutes" that had been opened throughout the country in the early years of the Republic. His poetry dealt with the subjects of nature, love and social events, and he left behind a great many recordings. He passed away in 1973.