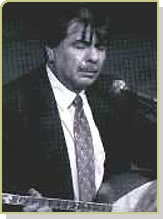 Born in 1945 in Erzurum, Arif Sag first became acquainted with the baglama at the age of seven. He entered the Aksaray Musical Society and became a student of Nida Tüfekçi. After working for a time at Istanbul Radio, he went on to work as a composer and director in the professional music circuit. He is known as one of Turkey's foremost baglama virtuosos, and has developed his own technique on the instrument, which has developed into the Arif Sag school. Though he was involved in composition for a time, he concentrates today on education and performance.