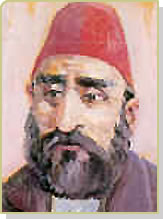 Abdi Efendi was born 1787 in Istanbul's Davutpasa district. His father Kadi Halil Efendi was a composer as well. Though Abdi Efendi wrote pieces in other forms as well, it is his pieces in the sarki form that are considered the most successful. Abdi Efendi passed away in his home in Kabatas in 1851, and was buried in the Seyh Cemetery in the district of Maçka. The inscription on his gravestone makes it clear that Abdi Efendi was an instrumentalist as well, but it is not know which instrument he played, and no recordings of him have been located.